A view of Lyon before leaving for Roanne: 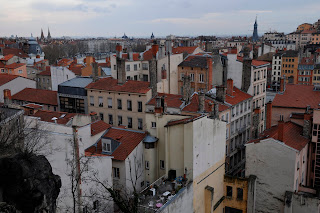 Here is Maxime trying to tie shut his mother's green tin box stuffed with memorabilia, "his life", with an old elastic string: 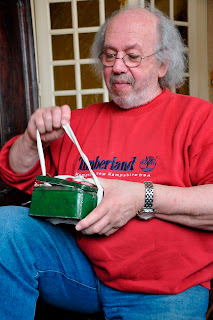 This text is from an earlier post:
Corinne drove us to Roanne to meet Maxime Friedenberg, an extraordinary man who survived the war as a Jewish boy because a protestant community hid him near Roanne.

Maxime showed us this official paper that stated that the Friedenbergs were upstanding good citizens: 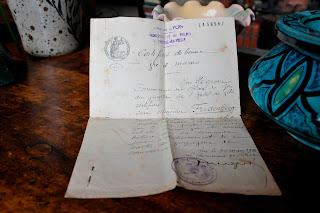 Actually, he was able to change his name and attend the regular local school. No one denounced him or his mother. He is now a sculptor, sculpting Obama and expressive faces out of stone.

This is "Affrontement" - Confrontation, my favourite sculpture of his: 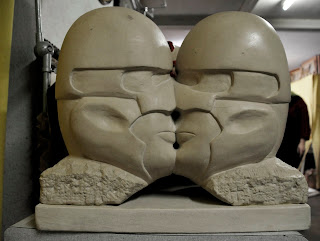 And here are Maxime's hands pulling away stuff to show us this strange marvel - a woman giving birth to her own brain, the umbilical cord an elephant trunk, or her mind growing to meet her body..... 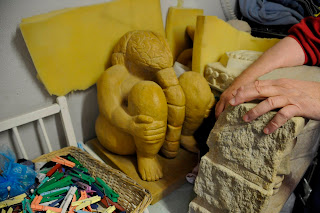 Maxime's studio in the basement: 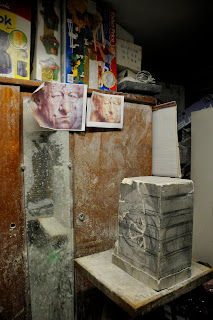 He said 2 unforgettable things. One, he told us a story when I asked him if he remembered seeing German soldiers. He was walking through the main intersection of town with his mother and he saw a big German soldier with his bayonet. He wanted to touch the bayonet and reached for it and his mother pulled him away. Years later, when he was a French soldier in Algeria, a little Algerian boy saw him with his bayonet and reached out to touch it. His mother pulled him away. Maxime said the only thing that mattered was the mother's sentiment. The other thing he said, when I asked him what he thought about memorials, was that they were "necessary. Necessary because there are negationists of history. Necessary to remember what happened."

The women of his family in Poland, all gone.... 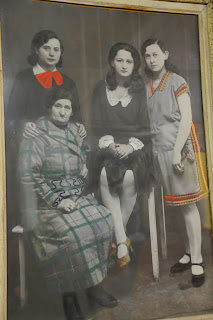 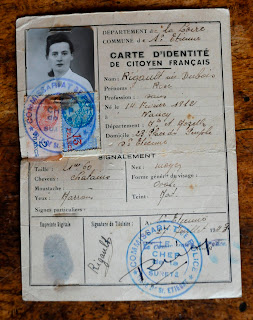 He has a small green tin box overflowing with papers, photographs that he ties shut with a white elastic rope. He would not let me look through it and cried a little when I asked him if I could. He had shown me photographs of his mother and family and I wanted to see more. He showed me the book A Duty to Memory by Primo Levi. I must read it. He showed me lots of things - a list of the houses known to be hiding Jews, thereby "exploiting the town of Roanne" with his name on it. (He gave me a copy of this.) His wife made us the most delicious meal: fresh salad with bread; rillettes of pork and potato gratin; cheeses, wine, apple tart and good coffee. 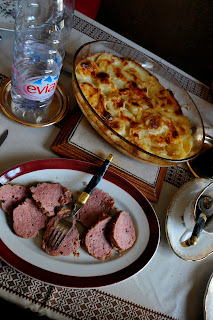 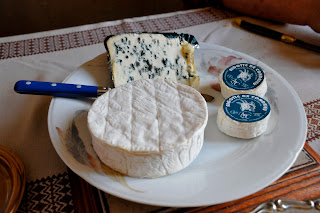 He wondered if he had been of any help to me. I do not know what I am doing with all this. As I told Tama, I am confused, befuddled, overwhelmed, sad, scattered and inspired. 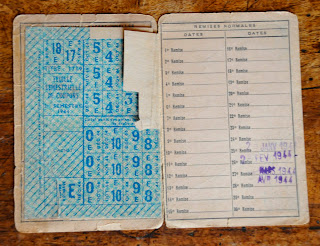 I plan to photograph all the plaques and memorials in Lyon and maybe even all the unmarked sites (like Joel Sternfeld's On This Site).

A memorial alongside the road out of Roanne to Resistants who died for the Liberation: 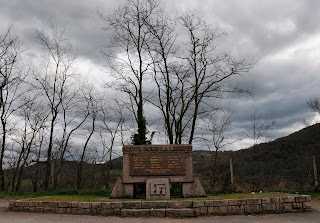 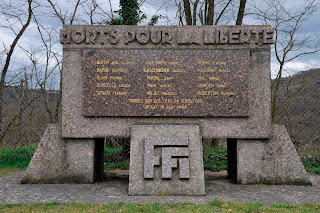 I still plan on making etchings at URDLA and am thinking of a series of heads, profiles, inspired by Tapies,but filled with various maps of Lyon. Not sure. Renee Levine's book has me wanting to record my own mother's memories of the war, something I have never done, probably out of respect for my mother's reluctance to speak about it. She told me recently that she remembers stopping in Vienne (a town nearby) when she was sent away to France during the war. 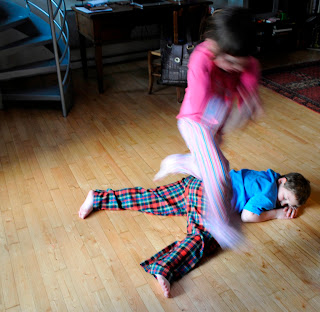 So, I emailed my mother and asked her to send me her memories of the war. This is what she wrote:

Here are some memories of WWII, not in any particular order. Opa used to listen to French radio stations as German ones only reported "victories". Some neighbor reported him. Oma was scared as to what might become of him, but nothing happened. Our house was bombed several times, roof damaged, windows blown out, one morning after an air raid we counted 13 small incendiary bombs around the garden which had not exploded.

Oma told me that once a dud fell through the roof and ceiling of the bedroom into my bed, another dud. Tante Inge, so I am told, threw it out the window on a dust pan. I remember one air raid (Wolfgang was home on leave from army) when we were all in the cellar, he was holding me, I was so scared. I looked at the small cellar window through which we were to get out in an emergency and thought that only I would fit! I wrote a poem about that; did I give you a copy? The outside of the house, camouflaged a shit-brown , had an arrow pointing the cellar window.
An air raid shelter was built in the side of the hill across the street from our house; the Russian prisoners of war who built it were allowed to go in there during attacks, on Opa's special request. One day he invited one of them for coffee and cake on the patio (we were in the dining room, but could see him) I can remember very clearly the wooden kitchen stool with a white napkin on it, on which the man had a cup of coffee and a plate with a piece of cake on it. Somehow I felt that he was looking at me strangely--I felt partly afraid and partly just at a loss-- when I mentioned my feeling to Opa, he said, "The POW has a little girl at home, about your age." I often wonder if he ever saw her again.

Oma's mother lived in an apartment in Stuttgart. We heard her neighborhood was bombed (telephone service very bad, so it was hard to find out stuff) when Opa went to see he thought he recognized her by her shoes among the bodies lined up on the sidewalk! We found out days later that she was not home that day, had gone to Tante Else's. I also remember Oma crying when she received word of the brother's death in Russia (by phone at the neighbor across the street). I don't know which brother, she lost two, Walter and Erhard, killed within 6 month of each other, 22 and 24 years old. I know I sent you a picture of the grave in R. of one of them, with a helmet on the cross. I don't know who took the picture. Another memory is of Sonny staying with us one night when an air raid hit; She and i were sleeping in my parents' bed while the neighbors tried to put out a fire in the house across the street. The bedroom door was open and the fire reflected in the mirror which was the center panel of the wardrobe. When we woke up we thought our bedroom was burning but our screaming went unanswered as everybody was across the street. I only went to France years later of my own accord.

Near our apartment in Lyon: 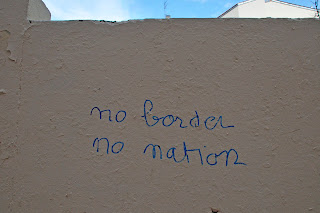