5 Things I love about France Today and Some Pictures:

A Reflection of Lyon in the window of Nardonne, a famous ice cream shop in Old Lyon,
closed (only for the season we hope?) 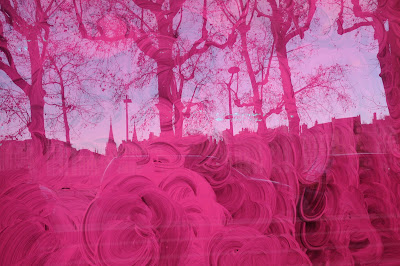 1) Parking is free throughout the city between 12 noon and 3pm so that people can go have lovely lunches and not have to worry about parking.

Guthrie's Cream Puff on our special Stay-at-Home-Snow-and-Art Day on Tuesday: 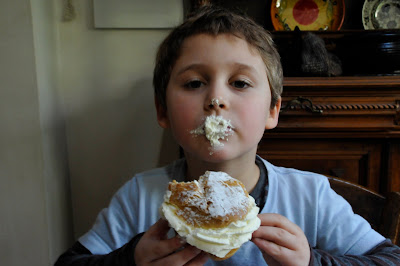 2) The Institut Lumiere - the Museum of the Lumiere Brothers who basically invented cinema, located 3 blocks from where David works - is full of old cameras, magic lanterns, Thomas Edison's films from the late 1800s, excerpts from Chantal Ackerman and Peter Greenway films (and many others) that are influenced by the Lumieres are screened in the basement; the attic maids' quarters are open to the public and in the late afternoon sun, the oval window becomes a woman's head, the cast shadow her neck; the attic library is sleek, modern and full of students studying the history of cinema and film; the decorative peacocks on the ceiling have little electric lights at the tips of their fanned feathers; there are lots of buttons to push for Guthrie and Harper to make projection and camera devices spin and to make lights light up in the rooms of the miniature model of the house you stand in - the house the Lumiere's lived in and that is now a stunning museum. It has all been redone since we were here 10 years ago and is absolutely amazing. There is an outdoor curved screen for outdoor movies and an open red clay court for boule playing, not to mention an adjacent movie theatre where the Lumiere factories used to be and of course, a glorious park perfect for picnicking.

A typical view in Vieux Lyon: 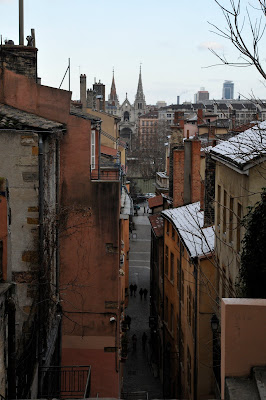 3) The big hospital, Hopital Edouard Herriot, next to David's work, where we had to take Harper yesterday for her irritated bumps along the underside of her left arm to see the Chief of Dermatology, is LOVELY. Can you imagine a "lovely hospital"? It has many buildings - all built in the 1930s, my favourite period of Modern-Euro architecture, with sidewalks and lawns and cafes throughout. There is a comforting calm there. Our doctor's office was an old wooden one with windows and he was gentle and diagnosed a strain of pox, Molluscum Pox, that should go away by itself (we hope).

The wire (found in the backyard) and paper "puppets" that Guthrie made on our special day: 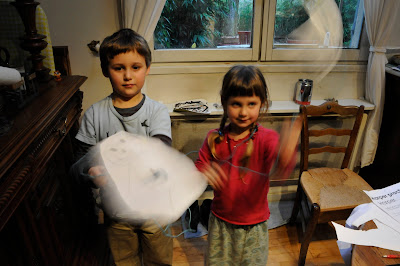 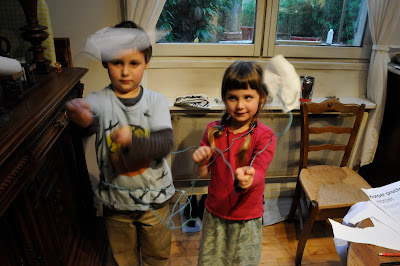 4) CANUT - the wonderful Lyonnais radio station named after the radical and organized silkweavers of Croix Rousse fame - plays Edith Piaf and then Rip, Rig and Panic (Neneh Cherry's post-jazz-punk band before she was Neneh Cherry and one of my favourites. I have all their vinyl albums and never hear them played anywhere else in the world), the Clash and unknown French troubadours all day long. 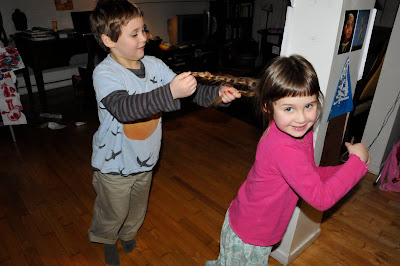 5) The people can shut down the country in a day with strikes and social movements.
Posted by Unknown at 12:54 AM