Andree Georgevail, Woman in the Resistance

Yesterday, after an amazing lunch at the oldest Brasserie in Lyon, Braserie Georges (since 1858) - Ravioli Dauphin in a chive-cream sauce with fresh rolls and cafe gourmand (espresso with 3 little tartlettes), Corinne and I went to meet Andree Georgevail, an 88 year old woman who worked for the Resistance.

A postcard on her wall, "All men are my brothers.
No one can make me kill them." 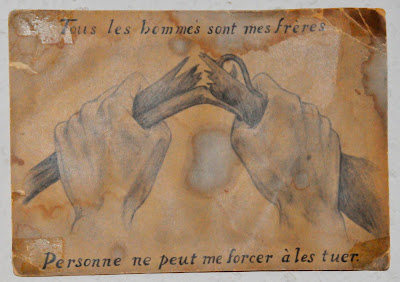 We went to her apartment in a small suburban town of Lyon where she greeted us with pear juice and a plate of cookies and chocolate. Every square inch of her 4 room flat is covered with bookshelves, pictures, paintings, mementos, posters, cheese boxes...She pushed a wooden tray-cart around to help her walk and on it was a pile of documents, books and other material related to the Resistance. Her story is not necessarily a heroic one, not one you will read about in history books, but without her and many others, who knows how many more days the war and the Nazi Occupation and the Vichy Regime would have continued and then how many more Jews, Gypsies, Communists, Socialists and gay people would have been murdered in the name of facism? Less than 2% of the French population worked for the Resistance - around 500,000 people and 10% of the male population were prisoners of war in Germany - either held as hostages or worked to death as slave laborers. Most people just tried to go about their business as usual.

Her living room wall of shelves: 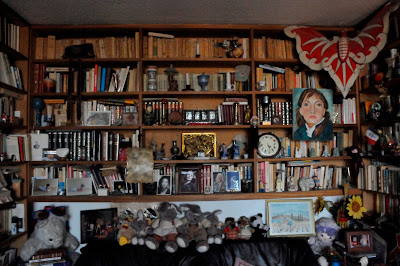 Andree Georgevail, like many others, joined the Resistance towards the end of the war, in 1944. (In the car afterwards, Corinne offered one explanation: towards the end, the Resistance had much more financial and other support from the UK and the USA and were able to provide for people to work for them, whereas for several years, you would risk your life "for nothing" against the Nazis, most likely going to prison or being shot to death.) Andree went to visit her piano teacher to beg for more lessons. She fell down from hunger before she could ask. He offered her a paid job and extra ration tickets for food and necessities for transcribing speeches and writing coded messages for the Resistance. She agreed. 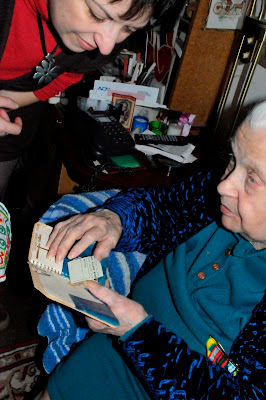 Her ration book, pages for potatoes and soap: 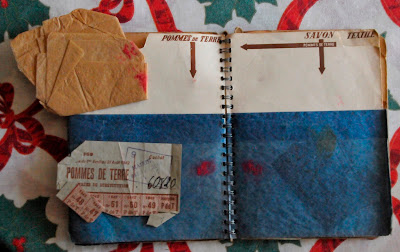 Her kitchen with words for Scrabble written directly on the wall: 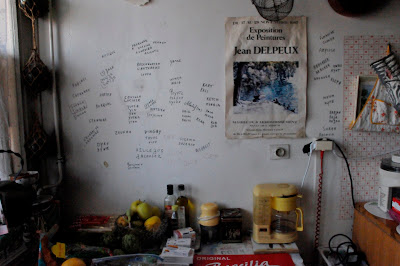 Her kitchen with a collection of cheese boxes hanging above the door: 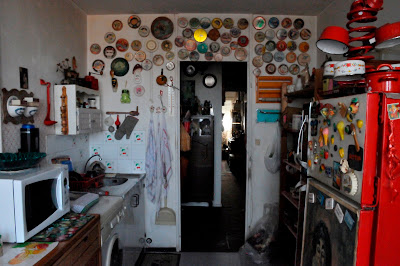 I do not want to sound judgemental. I admire her for doing this and admire all the others - secretaries, hairdressers, bakers, soldiers, art historians, writers who did something for the Resistance - all those relatively unknown people who are not heroes like Jean Moulin, but who did something in the face of such criminal cruelty and human horror, while their families and neighbors did nothing. So many died. "100,000 Resistants are thought to have died during the war - executed, killed in combat or dying in the camps," Matthew Cobb writes in his amazing book, The Resistance: The French Fight Against the Nazis (2009), thanks to Barbara Mellor (translator of Agnes Humbert's amazing memoir). He also quotes Pascal Copeau, "...behind each set of initials you describe with such academic precision. there are comrades who died."

One of her many historical documents - this a transcription of a list of collaborators.
Here you can see the name "Barbie" - for Klaus Barbie, the "butcher of Lyon". 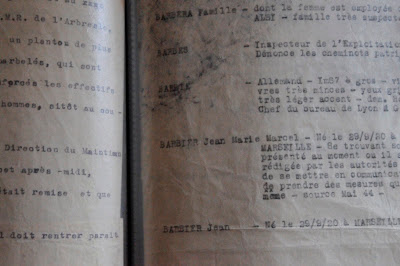 But still, I was surprised by Andree's unexpressed politial commitment against the Nazis. She wanted to survive, to be paid, to eat, to live, to sing. She performed in cabarets and after the war, many thought she had been a collaborator because many Germans frequented the cabaret. (To this day she oversees an old theatre in Old Lyon.) She did important work for the Resistance, typing up messages, codes, speeches, lists of Germans and collaborators that were sent to London and used against the Nazis, against Vichy. She was a link in an important chain. 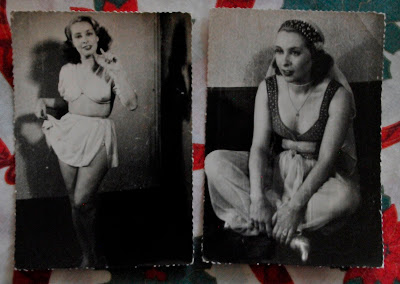 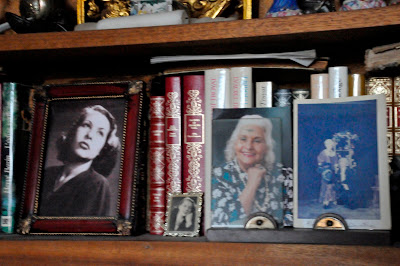 After the war, she joins the military after wrecking a car in Morocco. Again, she needed money. She went to Indochina with the French military in the 1950s as a colonialist and only after seeing her French comrade kill a pregnant Vietnamese woman (one of may atrocities she witnessed), does she turn against war. But still, she serves out her time in the military (She was a "Social Assistant, wasn't married and couldn't quit because of a signed contract"), adopts 3 Vietnamese refugees, works for arrested French Conscientious Objectors and receives several medals - for her work for the Resistance and for the war. 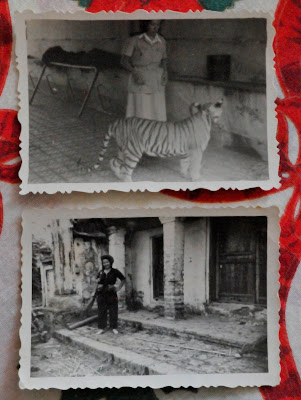 Holding a photograph of herself with her 3 children: 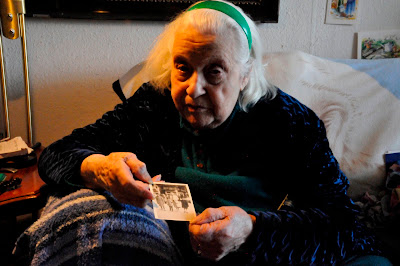 I had expectations. And whenever you have expectations, you are "disappointed." But disappointment is not quite the right word. I was surprised and confused. I thought I was going to meet a revolutionary, a woman who fought against war and militarism her whole life and who would speak with fired passion about humanity and against war and facism, and in some ways, this is the truth. But the truth is also that Andree is an actress who survived, lived a long and peculiar life by doing what she needed to do. The night before our meeting, I had watched the trailer for Maia Wechsler's documentary film Sisters In Resistance (again, thanks to Barbara Mellor), in which 4 amazing women who fought in the Resistance meet again decades later and speak about their indignation, their inability to sit by and watch the slaughter, their ethical duty to act, to fight, in such powerful, radical and emotional ways, that I cried with them. Andree cried when she described the horrors she saw in Vietnam and she cried when she held an old photograph of herself with her 3 adopted children, one of whom just died 2 months ago. She spoke forcefully, gesturing with her hands, breaking out into song. She says she wants to live until 122. Afterwards, Corinne and I both struggled to digest and understand and articulate what Andree Georgevail told us, how we felt about it, what it meant, what it means. We both felt confused, but also very grateful and awed.

When I asked Corrine to ask her (thanks to Corinne for this unforgettable opportunity and for translating) if there was a visual symbol of the war, of the occupation, of her role in it for her, she first answered that there were no codes, no symbols. There was an utter secretive silence. Later she described her typing in a closed, hot room. Blankets covered the windows to muffle the sound of the typewriter. She couldn't breathe. She typed every day in her stifling one room apartment.

What would I have done during the Occupation? What would you have done?

Why is there not a Map of the Resistance in Lyon (as far as I know), the capital of the Resistance, a map of events, of markers, memorials, of places where important things happened and where Resistants lived and worked? Perhaps, if I do not unearth one, I will have to make one myself.

Fort Montluc, where Klaus Barbie was held and tried and where so many people were tortured and brutally murdered by the Nazis and their accomplices, is now a completely refurbished police station that Corinne drove me around at dusk after meeting with Andree. Corinne's nephew questions if there really was a Holocaust and she is as appalled as I am.

Corinne had emailed me this about Andree days before our visit: "My friend Bruno, who is looking after her, told me a little more about her. He knew her for a long time. He was also anti-militarist. He didn't want to go to make military services so he went to jail for that. And he met her at that time because she supported this movement and she fought in the 1960s for the liberation of those young men, anti-militarists.

She was born in 1921 and was 18 years old at the beginning of World War II. She was very discreet in the Resistance, just a "small person, secretary". Bruno told me that her witness could be interesting for the daily knowledge of that period, she was young, she wanted to live. There was a kind of exploded junction between this young lady who was looking for pleasure, friends, love...., and the atmosphere of the occupation period and its consequences. she had the carelessness, sometimes unconscious, and the generosity of her age, like many young people at that time.

She was taken by militia men, "Milice" (french people who collaborated as policemen with Nazis). The men violated her. Bruno doesn't know exactly what happened to her and why they have taken her, neither when exactly. But she went to the hospital after that, and she had to have a lot of operations. And as well with psychological shock, she was sterile."

I am still processing this.

Andree Georgevail was so kind and generous to invite us into her home, to serve us cookies and juice, to share her life with us, her treasured possessions and intimate space, to pull out her medals pinned to a blue velvet shirt, to describe terrible things, to sing for us, to have survived and to have helped others survive. I hope I honor her here and do not seem to be questioning her motives or actions. I am thinking aloud, trying to make sense of actual ordinary people (civilians, citizens, the people Zinn talks so much about as bringing about change) - how they manage to survive war, how they undermine it, how normal it sometimes seems and then so radical.

Saying thank you and good bye to Andree Georgevail: 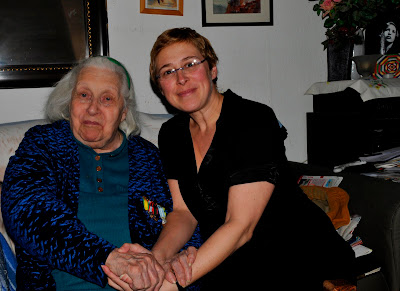 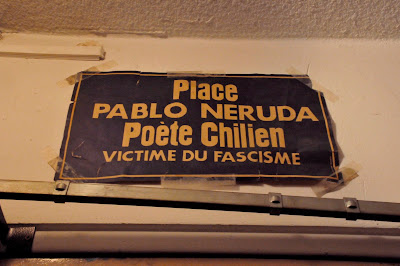 A photograph of the Liberation of Villeurbane in the entranceway to the Villerubane City Hall of Gratte Ciel, on of my very favorite buildings - architecture projects in Lyon: 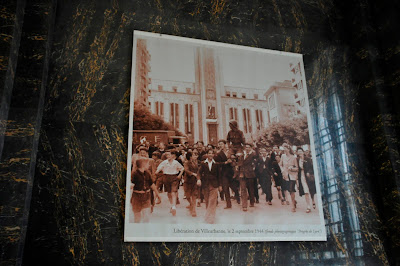 One of the Resistance Battalions, the Carmagnole, at the Liberation of Villeurbane: 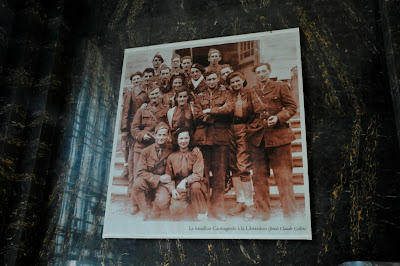 A statue honoring the dead from the Liberation in the Villeurbane City Hall plaza.
Ashes of victims of the Holocaust are buried beneath the flanking stone pillars of etched names (not shown here): 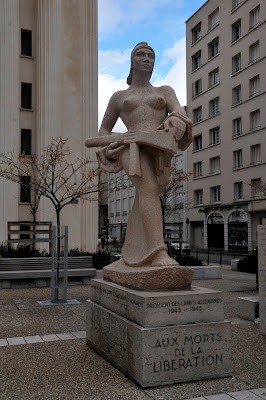 One marker at Fort Montluc, "Here suffered under the German Occupation, 10,000 victims of the Nazis and their accomplices. The Popular Insurrection, F.F.I., liberated on August 24, 1944." 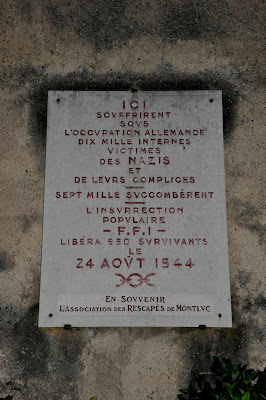