A detail of a Villeurbane wall: 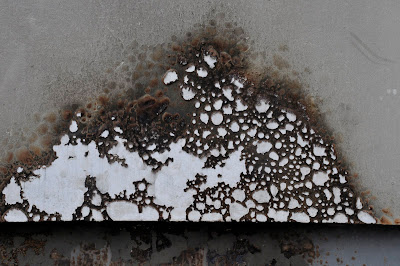 Today, after dropping the kids off to school in the snowy morning and going on a major grocery shopping trip to Carrefour in Francheville, I came home to leftover chicken and rice soup that I spruced up with apricots, dates, lemon juice and coucous = divinely comforting and tasty on a -5c day. I decided to go to the ICA in Villeurbane before the current 2 exhibitions - COLLECTION and LA VIE (with a diagonal line crossing it out) close.

Detail of the door. Cows on a door for a keymaker? 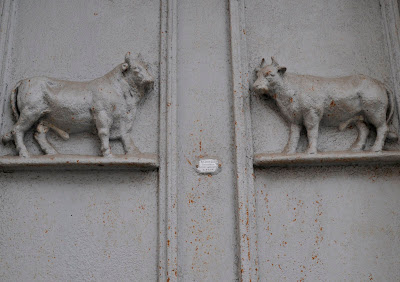 From Wikipedia: "Villeurbane is a commune in the Rhone Department, NW of Lyon, with which it forms the heart of the 2nd largest metropolitan area in France after Paris. With the industrial era, Villeurbanne's economy soared: the textile industry was the first to bloom, followed by mechanical and chemical ones. The factories lured in numerous immigrants, most notably from Italy. Transforming from a rural community to an industrial town, Villeurbanne underwent a tremendous demographic boom in the late 1920s. From 3,000 inhabitants in 1928, its population rocketed to 82,000 in 1931. Mayor Lazare Goujon (elected 1924) engaged the city in a vast public works initiative. Arguably the most visible heritage of this program is the Gratte-Ciel, a housing complex made up of two Art Deco towers and annex smaller buildings, lining up along the Avenue Henri Barbusse. These structures are the work of architect Morice Leroux, and one of the most notable Art Deco structures in France. Having undergone thorough renovation, the 19-story twin towers have become an emblem of the city." I do not understand why the Lyonnais speak so poorly of Villeurbane. I love it and keep a photograph of it up in our home in North Carolina.

The ICA (notice the old Garcons and Filles school in the background, part of the Institute) 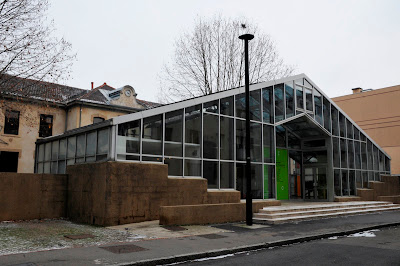 10 years ago they had an unforgettable Alighiero Boetti exhibition here. Today they had 2 shows. One was COLLECTION, "Within the ICA, the creation of new works is the core around which all other activities are structured and developed, and in particular that of building the collection. The ICA functions according to the principle of presenting its collection biennially, in situ." The show included 7 artists. Here are the pieces-installations I liked:

The first room, by Latifa Echakhch, born in Morocco, lives and works in France and Switerland. This piece is Fantasia (Empty Flags) Black 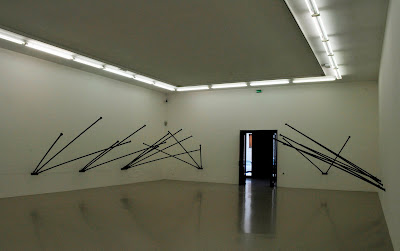 "Echakhch points to both the absence of 'a message of optimism and hope in international cooperation,' and that of the black flag, the symbol of the anarchist movement, as a token of despair and mourning." 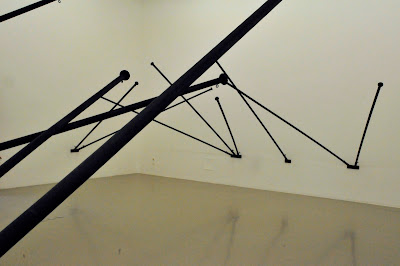 This room was so dizzying that I could only stay in briefly. Can I Crash Here (the undulating lines on the floor) and One two three four five (the section of black fence, inspired by Anne Truitt's minimal sculptures from the 1960s) are by Philippe Decrauzat, born, lives and works in Lausanne, Switzerland. 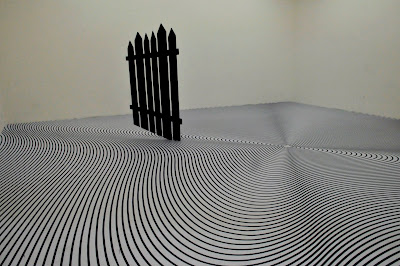 Pierre Malphettes, French, A wooden tree under an electric sun: 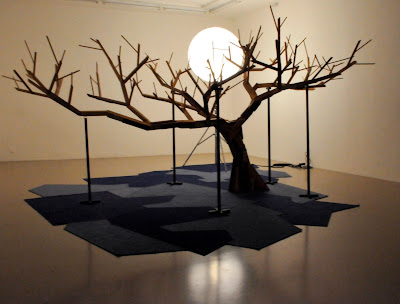 The other show, curated by Sandra Cattini, is LA VIE (with a diagonal line through it), the title which is "borrowed from Jimmie Durham, is a word that makes an image. It is impossible to pronounce unless described literally as 'life crossed out diagonally'. There was one piece that took my breath away, T.Y.F.F.S.H., by Kris Martin, who lives and works in Ghent, Belgium. 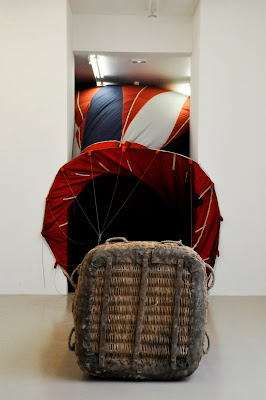 "The hot air balloon refers to the romantic, universal theme of the wish to be able to fly. However, this metaphor for liberty is turned into a weighty cavern subject, possibly claustrophobic. Because the ballon is kept on the ground, [sideways, as if trying to soar horizontally] Martin's work refers to the legendary story of the belly of the whale. " 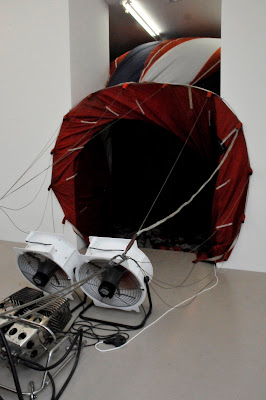 The fans spin and make noise so when you step inside the balloon room you can almost imagine that there is truly a mechanical effort being made to get you off the ground. The balloon material sticks to my boots as I walk inside the suctioned room, whispering to myself the whole time, "I just love this." It made me think of the early and jubilant days of flight and how quickly it descended into a tool for war (thanks Carol Brilliant Mavor). I also thought about the Wizard of Oz, the impossibilty of dreams, being stuck, struck down, landlocked, defeated, but how you can transform your space into a fantastic (im)possiblity. The sky is inside. The world is inside. It is empty. 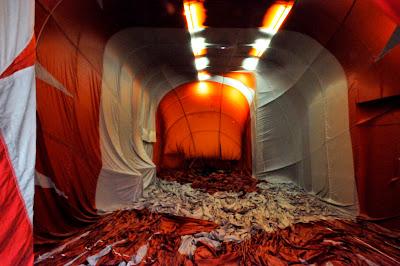 There is a drama to the red and white striped stretched, suctioned and scrunched interior, like a stage set, a theatre backdrop, the curtain call. It's also like a train car, a amphitheatre, a clamshell gazebo, a bomb shelter, underground tunnel. A museum door is rendered dysfunctional: 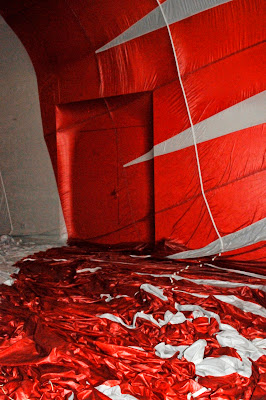 Looking out at the fans blowing as if I am looking out through a giant's eye or a monster's orifice: 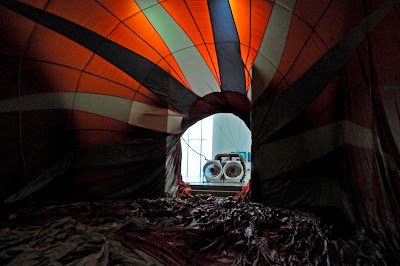 The failure, weight, gravity and possibility of machines. 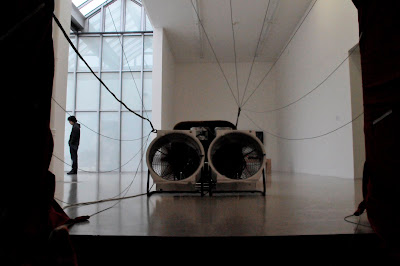 Austrian Lois Weinberger's Singing Bird is a close up of a bird petrified in ice. 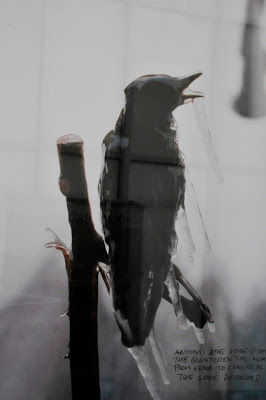 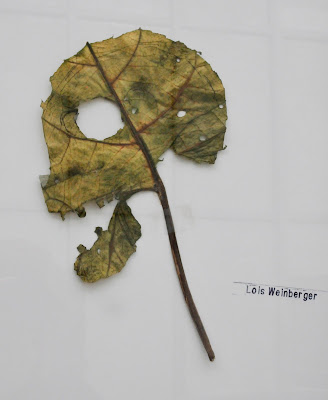 A tree in the courtyard of the ICA 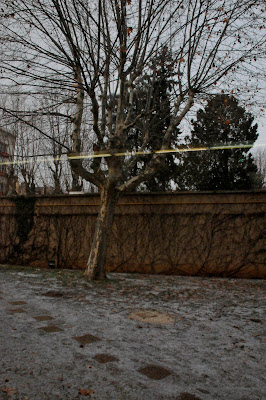 Back at home with the kids after a dinner of hamburgers, green beans and spiral pasta with butter and parmesan, strawberry and raspberry fruit tarts and pineapple juice, as they watch Pippi Longstocking. 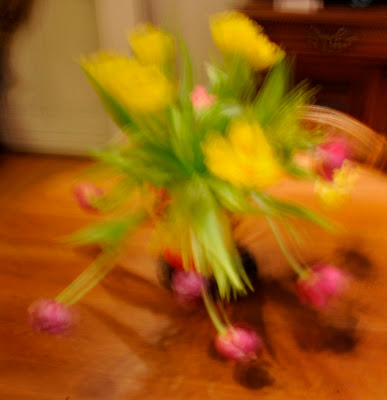