The day before we left Lyon for Paris, I met Corinne at the Centre for Deportation and Resistance to see the Centre of Documentation (archives, books, films, microfilm, etc). All the films I need to see about the Resistance are there and I can go there and watch them! The librarian also showed us an interactive online map, on the City of Lyon's website, of historical sites and memorials to the Resistance in Lyon. This will be useful for my own map. I am glad one DOES exist and that it can be accessed all over the world via computer. I now want to make a different kind - a series of etchings, a huge one, one that can be folded or flipped through for those people wishing to walk the city to see these places. Corinne and I sat and flipped through images on a computer screen of: bridges sabotaged by the Resistance; Maquis in the fields, woods, mountains; truckloads of refugees; bomb craters; propaganda posters. 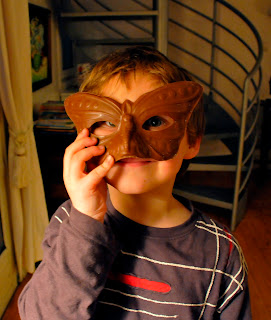 Corinne came over for dinner that night - a spicy shrimp, lemon, garlic and parsley linguine with a fresh arugula, spinach, gorgonzola, raisin and pear salad, fresh bread, green beans, and the most amazing raspberry-marzipan tart. Corinne brought the perfect bottle of white wine from Alsace - delicious! She also brought beautiful Mardi Gras chocolate butterfly masks for the kids (above). 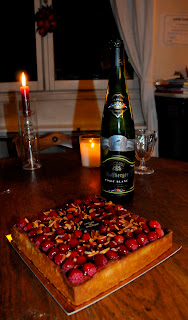 At the top of the sixth flight of stairs at Laurence's Vincennes apartment:

We drove 5 hours to Paris - to our friend Laurence's small apartment in Vincennes, 6 flights up, no elevator. We went straight to bed only to wake up around 4am because David was in excruciating pain again from kidney stones. It was raining and snowing, freezing cold grey outside. I ventured out with the kids to find a pharmacy only to realize the only 24 hour one was blocks and blocks away. So, I convinced the man at the nearby shop to let me use the phone to call the SOS doctor/emergency number (and to let Harper use the potty in the dark back room at the same time!) They said an ambulance would be there "rapidement'. I had to move the car so we would not be towed and the kids and I trudged through the snowy rain with umbrellas and luckily found a free spot across the street alongside the Park Vincennes. By the time we got back to the apartment, David had been taken to the hospital by ambulance, leaving a note with the hospital name. We were scheduled to meet Carol and family at the Eiffel Tower at 10:30 and David had told me to take the kids (for Guthrie's birthday present), so we took the metro and voila! When the metro came out of the tunnel, Paris was in full sun! We met Carol, Kevin, Augustine and Oliver and went up to the 2nd floor by elevator. Harper and Guthrie brought their binoculars, got 2 little Eiffel Tower keychains and postcards and loved seeing Carol, who brought sweet gifts for them both, making them very very happy. 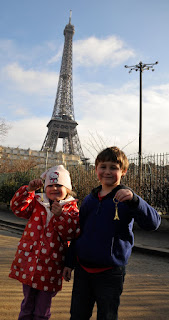 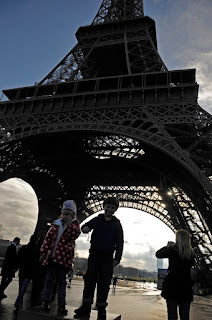 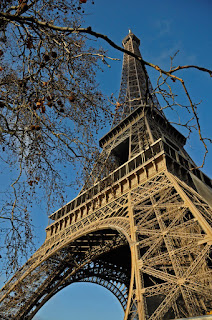 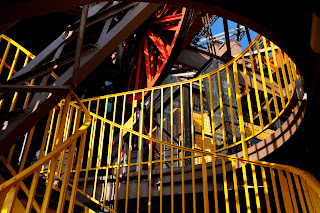 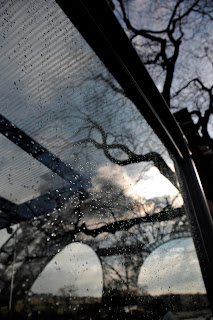 We took a taxi directly afterwards to the hospital, missing David by 3 minutes. I was in tears, exhausted and worried. David did not have keys to the apartment and I was not even sure he remembered the address or door code to the building. We had to walk long blocks to find a taxi stand and i told the driver Ave. Franklin Roosevelt, showing him the address in Vincennes. After quite a while driving - the hospital was in the Vincennes neighborhood where we were staying - I clarified with the driver that it was Ave. Franklin Roosevelt in Vincennes. "Ah Madame!" He thought Paris, so he had to turn around and drive for quite some time back to Vincennes. I was in tears again. By the time we got to the apartment, we had missed David again. Luckily, he left us a note that he was at the pharmacy getting his medicine and would be back soon. I made the kids noodles for lunch and when David got home we all took a long nap. He was not even charged for the ambulance or hospital and was given 2 drips of painkillers while there. Feeling better, we went off to see Christian Boltanski's new remarkable installation, Monumenta, at the Grand Palais and to the Jeu de Paume for exhibitions by 3 women photographers, including Lisette Model.

Harper's photograph of brother and Papa on the Paris metro: 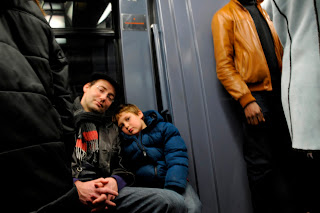 Guthrie's photograph of sister and Mama on the Paris metro: 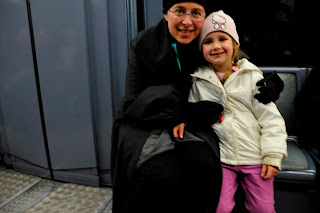 Christian Boltanski's Monumenta at the Grand Palais, a huge pile of clothes with a red crane hand reaching down regularly to grab some clothes, lift them up high and thend rop them down, fluttering like birds. Sometimes the hand takes too many clothes and can not lift them. 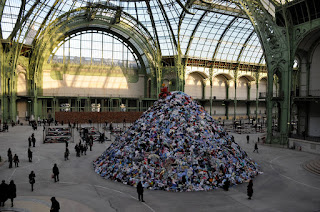 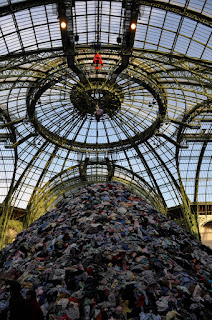 There is a signature Boltanski wall of rusty tins as you walk into the
spectacular interior of the Grand Palais: 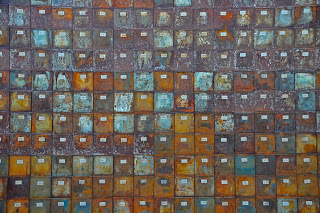 This is one of my favourite greens, institutional, jade, sea foam, and on these art noveau pillars and Guthrie's red Cassius Clay t-shirt by Basquiat - wow! 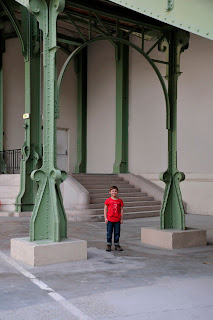 Harper playing on one of the Grand Palais' interior architectural balls: 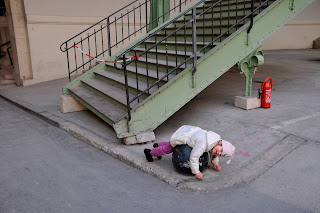 Paris at dusk, looking back over to the Eiffel Tower from the Jeu de Paume: 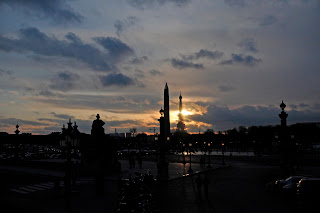 By the time we were finishing Boltanski, David started having pain again, took some medicine and sat out the Jeu de Paume in the lobby. We took the metro home and David lay in bed in pain until he fell asleep. I made some pasta for dinner and let the kids open some birthday gifts and we all went to bed, deciding to leave Paris a day early, missing the Mona Lisa. We drove home on Sunday under gorgeous dramatic skies, finding a very cool mushroom playground on the side of the highway and some bad highway food. It felt good to be home.

Guthrie feeling his loose tooth and feeling bad after stepping on
Harper's fingers on a ladder inside one of the playground mushrooms: 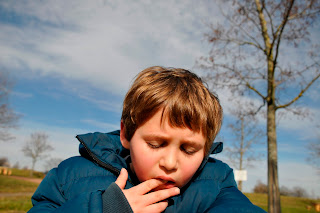 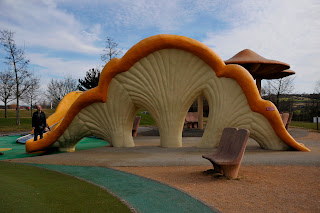 The top of the pink flower slide: 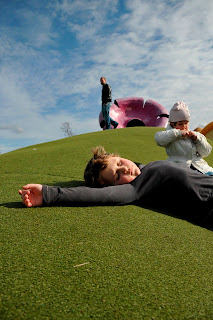 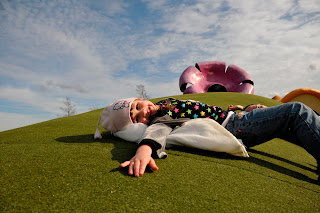 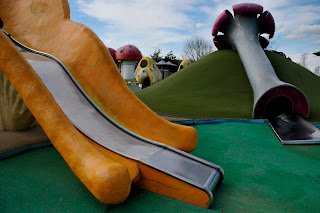 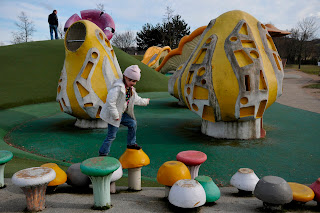 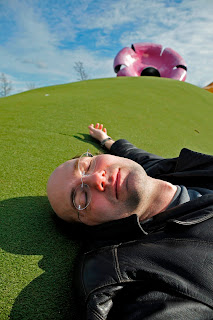 Yesterday was Guthrie's 7th birthday and he was HAPPY all day. It was perfect. He loved his presents: a Pokemon disk shooter with suction cups; a Praxinoscope (spinning projection machine) from the Lumiere Institute; marbles; a harmonica; another Pokemon game and other little trinkets. We had bagels for lunch and found a can of refried beans for him - his favorite and impossible to find here. They rode the carousel and he picked out his desserts - apple tart and raspberry tart. I made his requested dinner: chicken, rice, refried beans in tortillas and David and I had yummy margaritas (with sugar-salt rims, cointreau and fresh lemon-lime) and guacamole.

He lost his 2nd top front tooth while eating the bagel and the tooth fairy brought him another 5 euros! He looks like a 7 year old now. The kids are on a week long vacation, with another 2 weeks off in April. Lucy and Pam arrive on Thursday for a week and I go to NYC-Hartford to give my lecture at University of Hartford on "Framing War". David went to see a Urologist yesterday and recommended that he see a radiologist. He goes on Thursday. Seems like he can only take these prescriptions and wait it out, hoping to pass all the stones on his own. If they can see anything with the x-rays and cat scans, maybe they can use some ultrasound laser technology to get the stones broken up or even operate. He is at work but exhausted and in pain. (Now he is home sipping Tilleul (lime tree) tea, a litre of it, per the local herboriste's recommendation.)
Posted by Unknown at 3:43 AM