Here are Harper and Guthrie ready to devour the traditional January cake - Gallette de Roi - like Louisiana's King Cake. I bought it at Rolancy, which according to our French friends is one of the best patisserie's in Lyon, the gastronomical capital of France. Rolancy is just a few blocks from our door. A Gallette de Roi is a thin delightful cake of pastry dough layers filled with frangipane - a marzipan like filling. The top is slightly glazed and inside there is at least one porcelain prize for the lucky eater who gets it. If you get the prize, you wear the paper crown that comes with it. I guess I was lucky to buy the medium-size one that came with 2 crowns - one silver and one gold - because there were two prizes inside: a perfectly miniature cake and a bar of chocolate. David gasped when I cut the cake in just 4 pieces ao I made it into 8 pieces, but then we polished it off in one sitting. Just melt-in-your-mouth divine. 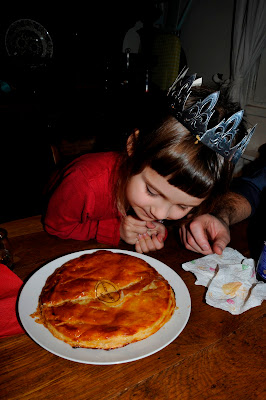 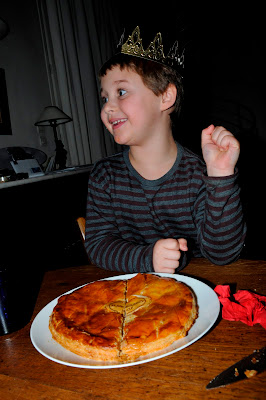 Last night we had our first French babysitter, Colin, a 16 year old boy with a small English vocabularly, watch the kids for a few hours so we could go out for our first French dinner at a famous and multi-starred restaurant downtown, Leon de Lyon. It snowed all day and I had to pick the kids up early from school. They have not seen snow like this here in Lyon for over 10 years, so we were nervous that Colin wold cancel or the restaurant would close. But Colin and his nice father Fabrice showed up and we ventured out into the slushy, fluffy and cold, cold snow. David assumed we would take the metro down the steep incline of Croix-Rousse into town but I assumed we would walk, as we always did 10 years ago. Silly me in my black boots with heels! I almost wiped out several times down the hundreds of slippery steps and then through the even slippier Place Terreux (with a permanent public installation by Daniel Buren) and the sidewalks. We finally made it to Leon de Lyon - one of the most famous Lyonnais restaurants (where the G7 under Clinton were celebrated and served). There is an old wooden revolving door and the walls are papered with vertical dark stripes and on every wall hangs an old quirky oil painting, lit from above: chefs collaborating in an alleyway and pigs dancing. When I went down to les toilettes, I discovered a veritable museum of oil paintings, pastels, sketches, sculptures and drawings - all of Leon de Lyon - little dancers made from the lead foil at the top of wine bottles; a glass display cabinet of porcelain chef statuettes...

The service and food and drink are all impeccable. We started with a form of a Kir Royale (champagne with creme de cassis). Ours was a Cremant de Bourgogne with Creme de Cassis and was absolutely refreshing and see-through violet. The sweet waitress brought us a basket of perfect bread with a small white pot of delicious olive tapenade. We took our time with the menu and eagerly watched them bring other people their food. David chose the menu - an entree, main course + dessert. He started with an amazing Veloute de Legumes (velvety cream of vegetable soup with creme fraiche - somewhat like our sour cream), followed by a round pork chop with a thin crispy glaze in a pool of sauce with a croissant shape of whipped potatoes that reminded me of my mother's dumplings. I chose the Filet Mignon in a pepper sauce with sauteed mushrooms and gnocchi. The gnocchi were slightly browned and the mushrooms delicate and full of flavor and the filet mignon was sliced in rounds. I love how the French eat - small, beautiful portions, balanced and slowly. We drank a lovely St. Joseph red wine with dinner and a an old-fashioned carafe of water. For dessert, David picked one of the fresh cheeses drizzled with flower honey, like Fromage Blanc = yummy. I chose the "Theme of Spices" dessert - spice ice cream on spice bread with a purple poached pear sprinkled with candied orange peel - divine, by far my favorite dish of the night. Of course we shared and enjoyed it all tremendously, every bite.

We took the metro home - up the steep steep hill and came home to a quite apratment - kids sleeping, Colin watching TV. He said everything was okay and the kids have asked if he can come again. Maybe we will make this a regular Friday event and fit in a movie next time.
Posted by Unknown at 11:36 PM