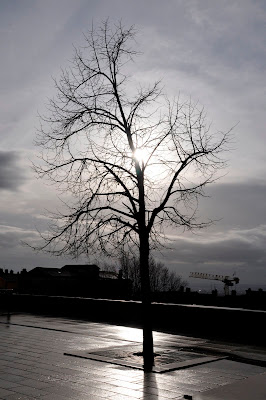 We had our first SUNNY DAY today! The tree above sits at the end of our street and at the top of the grand stairs (Grande Montee) up to Croix Rousse and down to town. I didn't even need to wear these "glittens" for most of the day: 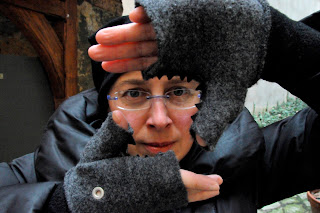 Okay, forgive me, but so much of our experience here is about EATING (shopping at the markets, going to divine restaurants and peoples' homes, preparing food, feasting, fromages, desserts...) that you must indulge me as I describe a couple meals. We had our sweet French babysitter, Colin, again on Friday night and we had reservations at one of Paul Bocuse's smaller, less expensive restaurants (Nord, Sud, Ouest, Est), Le Sud. We strolled downtown, picking up a cool bright orange corduroy skirt for Harper and an irridescent blue-green slip dress for me at a Depot Vente (thrift shop) for 2 Euros (3-4 $), on the way. Le Sud is right near Bellecour, one of the big plazas in Lyon with a huge ferris wheel. We had delicious tapenade and fresh bread with Kir Royales (champagne with creme de cassis), escargots, and David had a lamb tangine and I had delectable scallops with a fondue d'endives risotto surrounded by velvety vegetables = delicious: 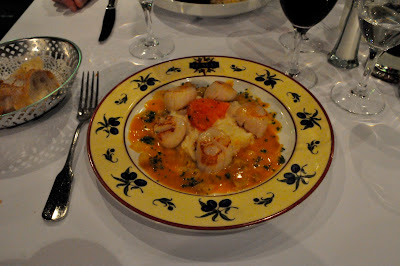 I then had one of my favourite desserts, Fromage Blanc with a coulis of red fruits. Fromage Blanc is a heap of soft-sour cheese - somewhat like Greek yogurt - usually served with fruit compote or coulis or honey. 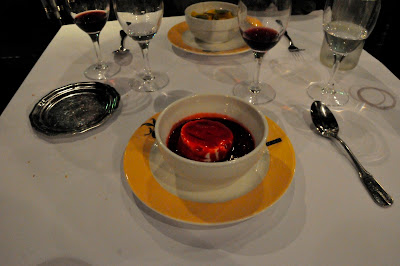 Then we walked back home, through the nightlit streets. Here is Hotel de Ville (City Hall): 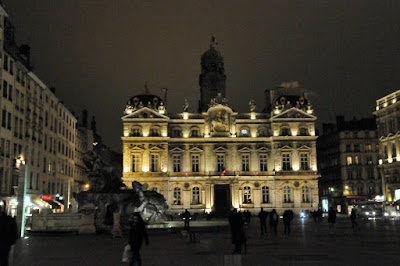 A poster for the new Gainsbourg movie at the Place Croix Rousse (these are forbidden on buses due to a new anti-smoking law-campaign): 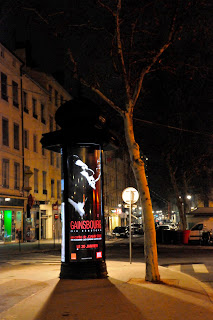 Last night we went to the house of Anne and Emmanuel, friends of our good American friends, Will and Christina. I did not bring my camera. They have 3 girls, Elodie, Juliette and Adele. We had such a great evening. They are both from France originally but have lived in Canada and New York City for over 10 years and are now U.S. citizens. They are now back in Lyon, living in Caluire, the little town north of Croix Rousse. They are so nice and generous and we hope to go hiking with them some day or help them renovate their new-very old house. They served a perfect cotes du rhone red wine with cashews and dried cranberries, an amazing creamed pea, shallot and ravioli soup with bread, Goue de Porc (PIG CHEEKS!) stew with carrots and pearl onions served on spiral pasta, fantastic goat and roquefort cheese and salad and then homemade apple compote from their own apple tree and homemade Madeleines, fresh from the oven! This was truly a spectacular meal. I must admit that the pig cheeks were melt-in-your-mouth delicious. We didn't leave until 10:30 - Harper asleep in one of the upsatir beds and Guthrie comatosed watching Tom and Jerry.

Today was incredible because it was our first full day of sun after a month of grey, cold, snowy rain and such a loud driving rain last night that woke us all up. We walked downtown, along the river, 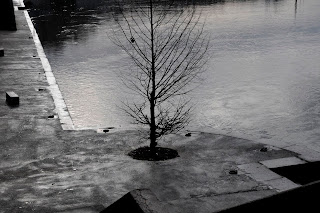 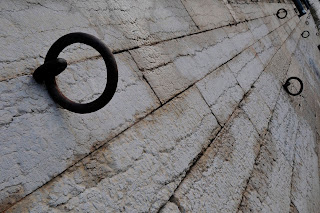 looking across to Vieux Lyon, 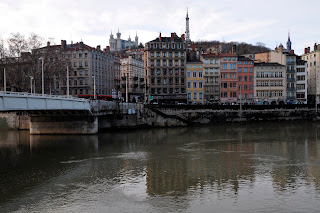 and looking up to our neighborhood Croix Rousse: 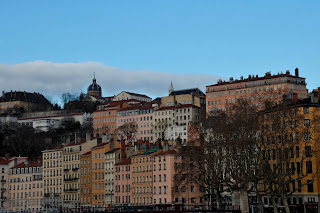 passing the most famous trompe l'oiel that includes Paul Bocuse 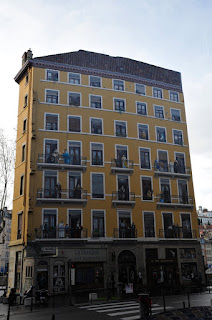 and the Lumiere Brothers 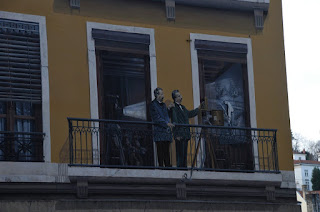 through the art market where we bought 2 paintings, including one of a green car that looks so much like the green car parked on our street that I photographed in the morning: 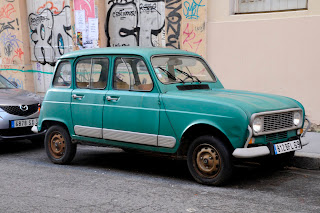 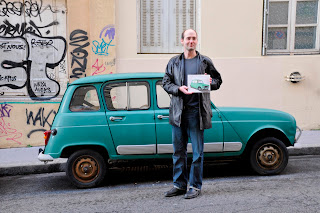 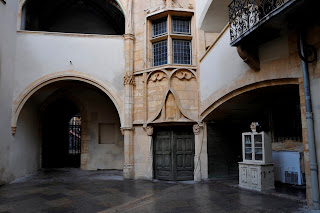 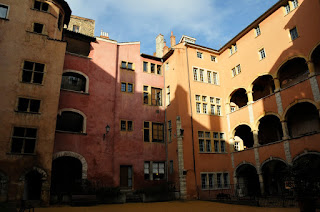 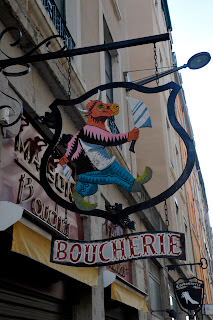 stopped into Cathedral Saint Jean that houses a clock from 1370 that still keeps time. We waited until 12 noon to see the rooster on top flap its wings and the cupids pump their batons and an angel drop down to Mary, 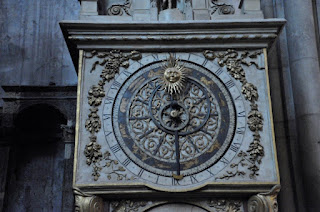 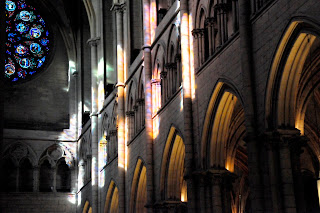 took the funicular up the steep hill to Fourviere (the white white cathedral that overlooks Lyon). 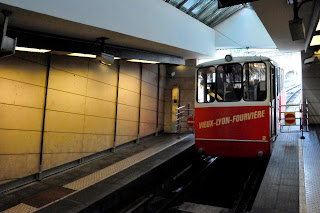 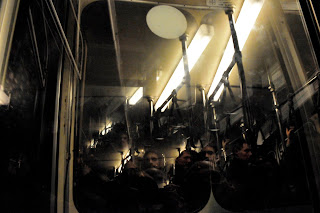 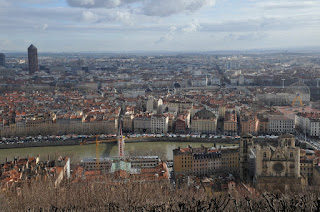 and when the sun went behind a cloud, we went inside where girl scouts were playing pictionary and then a troop of boy scouts came in, carrying this crazy wooden dog with ribbons. 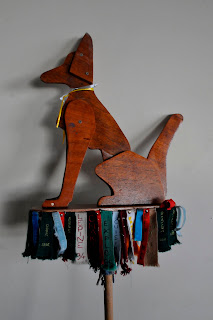 They sang a sweet prayer before their picnic and then their girl leaders asked me if I spoke French and then proceeded to bark at me, "You do not have the right to take pictures of people in France." I told them that I had asked the boy if I could take his picture and he had said yes, (not pictured here), but I was tempted to lose my temper and explain the history of French photography to them and point out the fact that I was just taking a picture of the wooden dog against the wall anyways, but I bit my tongue and walked away.

We popped over to the Greco-Roman Amphitheater (where we saw the Cranberries 10 years ago) for a bit, where they have built the museum into the hill and the kids climbed and collected rocks. 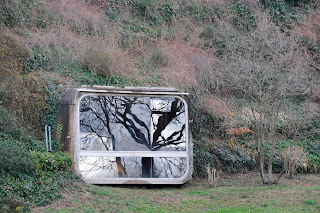 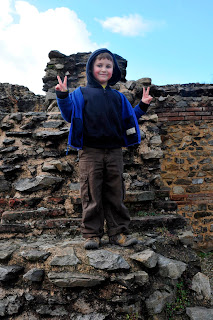 After visiting the Greco-Roman Amphitheater, we took the funicular back down the hill and walked all the way home, stopping at our favourite little ice cream place, Les Enfants Gates (Spoiled Children) where the kids waited for their well-deserved treats: 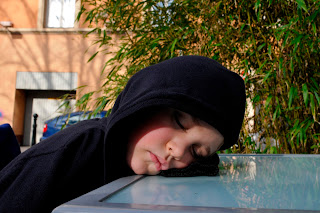 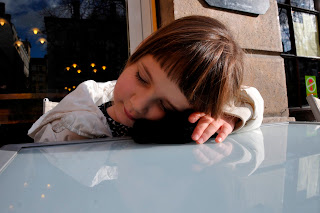 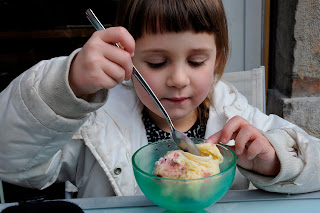 This place sits on the quaint Place Sathonay and up the stairs is the Salle des Mariages, where David and I tried to be married 10 years ago, but the required paperwork was impossible to produce before we left France: 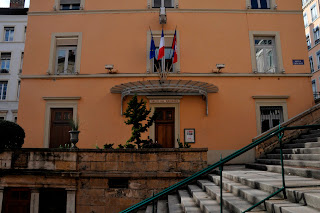