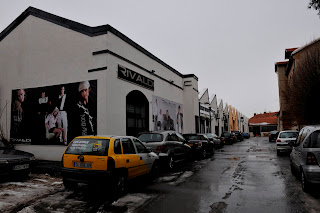 in Villeurbane, (like Carrboro to Chapel Hill or Brooklyn to Manhattan), and the door to URDLA, 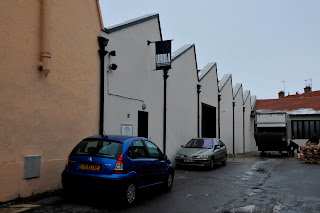 where I am an honorary artist-in-residence and will be able to make my first etching. I have to start thinking about what to do - something about the resistance, a map, labor-related/silkweavers, uprisings, strikes....

I first went there in 2000 to see a group show about the origins of photography and it's relationship to printmaking that included Annette Messager and Christina Boltanski and I reviewed it for Art Papers. Cyrille, who was an assistant then, immediatley introduced himself and gave me a fabulous tour of that show and we became fast friends and have stayed in touch over the years. He collects signs for lost cats and had us over for dinner 10 years ago and I still remember the quail eggs in aspic...

Today, 10 years later, I had a wonderful visit with Cyrille who is now the head curator at URDLA - an amazing printmaking workshop and exhibition space. I hadn't seen him in years and he looks exactly the same: 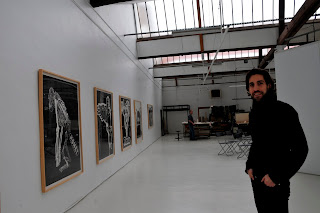 He gave me a tour of the great current show by Damien Deroubaix, a French artist living in Berlin who has been producing work at URDLA for the past 9 years. This show is a result of this effort. His work is bold, political and is in many major collections around the world. This is the only "painting/drawing" in the show - all the others are prints (woodblock, lithographs and etchings). 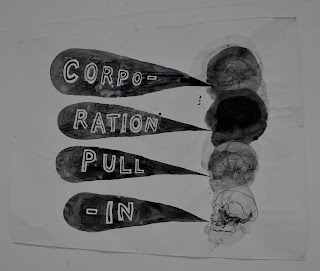 He wears a Motorhead t-shirt in the URDLA video documentary made about him - lots of skulls in his work. 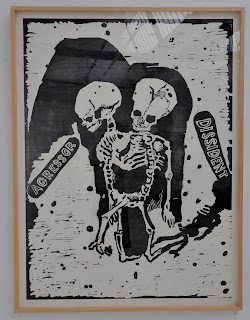 This is the biggest press at URDLA and they just renovated it last year:

And this is another one of their big presses:

And this is an old one that Cyrille wants to get working again for small lithographs. He calls it the "pedagogic press": 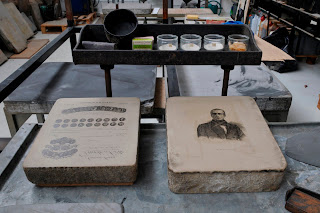 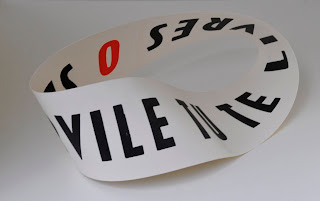 After URDLA we went to a funky nearby restaurant, Tonnerre de Brest, with sea shells and sand beneath the glass topped tables and little glass reliquaries in the walls, sardine can collections on the wall and lighthouses painted on the pillars. It was packed and the owner runs a childrens' book fair in Lyon. We had a tasty salmon in cream sauce with fesh tagliatelle, yummy bread and then: paper thin crepes filled with caramel du Breton (made with salt butter) = DIVINE with thin espressos served with a bit of hot milk. We were the last diners to leave. It was so nice to reconnect with Cyrille, to talk about Lacan (with whom he is obsessed), art, life, love, the French, and to see the fantastically renovated URDLA, done in 2008. When I was here in 1999-2000 it was a bit run down. Cyrille has done a magnificent job transforming it into one of the most interesting and critical exhibition spaces in Lyon.

A typical modernist Villeurbane building that I love to look at - from my car on the way to get the kids: 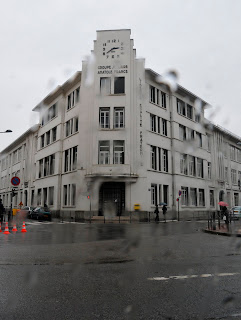 Walking up our street, Guthrie insisted that I take a picture of this wet rock in the gutter because it looks like a big piece of gum. Harper said it looks more like a big wad of wet newspaper. 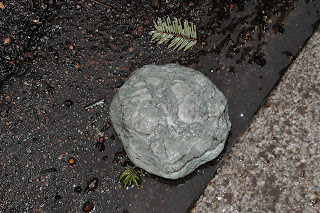 I came home and made a delicious dinner of fresh Cabillaud fish, lightly breaded and fried, a puree of potiron (squash), potatoes, garlic, creme fraiche, and butter, with rice, fresh hot bread from the bakery that David picks up every day on his way home from work, and a Pastis (licorice tasting aperitif mixed with cold water), followed by divine cheeses - St. Nectaire, Mont D'Or (my new favourite) and a Cantal.
Posted by Unknown at 10:39 AM